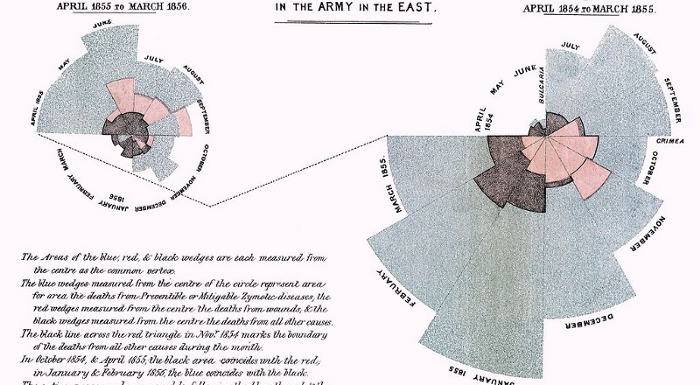 “What’s going on behind the analogies”– Sandra González-Bailón Outcomes are not always intentional. We trigger anticipated and unforeseen things with our actions. The “invisible hand” is consequential, known only through its effects. Like contagion processes, our actions are enmeshed in interrelated networks. These are some of the metaphors discussed by Sandra González-Bailón in her research on metaphorical thinking, social processes, and communication structures. She engages head-on with the challenges and affordances of digital realities- using data to learn about or “decode” aspects of social life. “Analogies help make creative connections; but they can also draw pictures of the world that are too coarse-grained for any useful purpose.” (29, Decoding the Social World) Polar area diagram by Florence Nightingale published in Notes on Matters Affecting the Health, Efficiency, and Hospital Administration of the British Army and sent to Queen Victoria in 1858.  Models and metaphors are helpful for human cognition and communication, it seems unlikely that they can (or should) be avoided. The role of metaphors and other modes of abstraction are sorts of “black boxes” that are convenient for communication. We humans think with them, but they do shape our view of reality. “The language of argument is not poetic, fanciful, or rhetorical; it is literal. We talk about arguments that way because we conceive of them that way — and we act according to the way we conceive of things.” (pg. 5, Lakoff & Johnson’s Metaphors We Live By) Perhaps other metaphors might be more productive — other models may work better than their forerunners. END_OF_DOCUMENT_TOKEN_TO_BE_REPLACED

Sandra González-Bailón began her presentation to the faculty and student participants of the University of Pittsburgh’s Information Ecosystems Sawyer Seminar on Friday, Dec. 6, by discussing one of the first sociology classes she took as an undergraduate in the late 1990s. She recalled learning about the debate between two early sociologists, Gabriel Tarde and Émile Durkheim, who disagreed about what role individuals played in social institutions and social interactions. Tarde suspected that social changes or developments occurred when people with social influence adopted the change or development. He argued this influence might not happen in physical space, but rather occurred between individuals writing letters to one another, or speaking to each other on a new invention, the telephone. Durkheim, on the other hand, argued that societies exist as amalgamations of the people who comprise them. This society is a new entity that is greater than any one group of people or small cabal of influencers. Durkheim was less interested in individual interpersonal interactions that was Tarde. Durkheim was able to back up his claims with data, and as González-Bailón put it, “won” the debate. He is considered to be a father of modern sociology. But González-Bailón, who teaches at the University of Pennsylvania’s Annenberg School of Communication and the Warren Center for Network and Data Sciences and studies the way social networks form and function online, suspects that, if Tarde had lived today and had the kind of data that social media or email can yield, he would have been able to better support some of END_OF_DOCUMENT_TOKEN_TO_BE_REPLACED